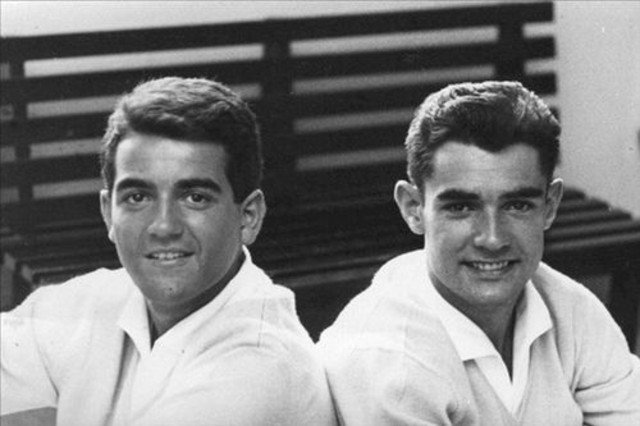 Manuel de la Calva and Ramón Arcusa met while working in an aviation company. After singing together at a Christmas party, these young music lovers decided to pursue a career naming their act Duo Dinamico. They started with a live performance at a local radio station and recording an EP for the first time in 1959, featuring "Little Darling," "Alone," "Cowboy," and "Recordandote." Soon, Duo Dinamico was performing along with Luis Mariano, Lucho Gatica, even the Platters, and getting main roles in movies such as Boton De Ancla and Buscame A Esa Chica. The pair wrote "La, la, la", the song that won the 1968 Eurovision Song Contest, performed by Massiel, while in 1972, after recording in London with producer George Martin, Ramón Arcusa and Manuel de la Calva decided to concentrate themselves in producing new acts, in addition, composing for prominent Latin artists. In 1986 Sony Music signed them up, releasing a self-titled album, followed by En Forma, featuring "Resistiré," which was chosen by Pedro Almodóvar as a main title for the movie soundtrack of Atame. Dúo Dinámico continued to perform in the years to come and in 2007 Quisiera Ser -- a musical featuring 24 of their hits -- began a run at the Teatro Nuevo Apolo in Madrid.