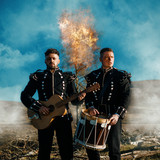 A brotherly bond drives the music of SAINT PHNX. The Glasgow duo of Stevie and Alan Jukes feel everything twice as hard together. Those mutual feelings inform the pair’s skyscraping alternative pop uplifted by towering hooks, eloquent songcraft, and energetic instrumentation.Since 2016, they’ve hustled hard, performed countless gigs, and even touched down on U.S. soil to write in LA. The duo served up their single “KING” and eventually garnered over 19 million Spotify streams and counting. In between touring with Yungblud and opening for everyone from Lewis Capaldi to Imagine Dragons, they unveiled their independent full-length debut, DDMN, in 2020. In the middle of their international rise, their dad was diagnosed with pulmonary fibrosis, which is a terminal lung condition. The boys had initially encouraged him to move to a warmer client, but he chose to stay in Glasgow, bought land in the Tinto Hills, and built a house. He turned the room above the garage into a studio where Stevie and Alan wrote, recorded, and remained close to him. During this time, they recorded “Happy Place” as dad cheered them on. They played it for him on his death bed, and now it tells their story together on the grandest scale possible. After gathering tens of millions of streams, touring with some of the biggest bands in the world, and receiving acclaim from Clash, Alternative Press, and more, the group welcome everyone into their family on a series of 2021 singles for Atlantic Records.