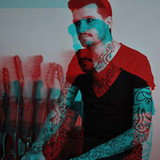 “I’ve been trying to behave for my whole life. Unsuccessfully” He has been studying violin at conservatory since he was six but soon he started playing with other instruments: he wanted to live out his fantasies further. In 2005 he released his first full length, “Paperdreams”, a collection of dreamlike trips offering the listener a little bit of everything. However the master of the work was lost in fire and it’s legend now. His style is clear-mindendly dazed, constantly evolving. Songwriting, classical music, electronic experimentation, trying to put together the pieces of a sensitive and, at the same time, chaotic world. He has also composed soundtracks for cinema and theatre. He’s the primary songwriter of the rock band Caravanserai with whom he has released the full length “Feral” (Garage Records, 2015). “Freischwimmer” (Pipapop Records 2017)

is the first taste of his future solo production. The Ep is permeated by troubled and dreamy atmospheres, above an original folktronic texture. The primal contact with water that you can’t easily forget. He’s working on several artistic projects and never stops dreaming.