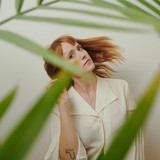 On her second full-length record, Head of Roses, Jenn Wasner follows a winding thread of intuition into the unknown and into healing, led by gut feelings and the near-spiritual experience of visceral songwriting. The result is a combination of Wasner’s ability to embrace new levels of vulnerability, honesty and openness, with the self-assuredness that comes with a decade-plus career as a songwriter, producer, multi-instrumentalist and prolific collaborator. Simply put, Head of Roses is a record about heartbreak, but from a dualistic perspective. It’s about the experience of having one’s heart broken and breaking someone else’s heart at the same time. But beyond that, it’s about having to reconcile the experience of one’s own pain with the understanding that it’s impossible to go through life without being the source of great pain for someone else.

Showcasing the depth of Wasner’s songwriting capabilities and the complexity of her vision, Head of Roses calls upon her singular ability to create a fully-formed sonic universe via genre-bending amalgamation of songs and her poetic and gut punch lyrics. It’s the soundtrack of Wasner letting go – of control, of heartbreak, and of hiding who she is. Head of Roses puts Wasner’s seismically powerful voice front and center. Those vocals help thread it all together -- it’s a textured musicality, quilted together by intentionality and intuition.