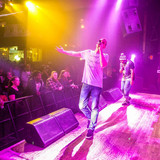 LONEgevity is a creative, music producer, emcee and engineer based out of Indianapolis, Indiana. He is a third of R&amp;B/Hip-hop/Eclectic group Section Leaders. His production work has been featured on sites such as 2dopeboyz, The Source, Mass Appeal, DJ Booth, BDTB, and many other publications. He has worked with/produced songs featuring the likes of Pete Sayke, Gritts (the other half of Hinx Jones), Add-2, Blueprint, Stik Figa, Tona, Roy Kinsey, ILL Brown, DreDai, Mike Schpitz (of Grumpy Old Men), Dominique Larue, Skittz (other half of Beats &amp; Breakfast), Rusty Redenbacher (of The Mudkids), Sirius Blvck, Pope Adrian Bless, Tony Styxx and many others. You can catch him on the New Old Heads podcast every Thursday. He's also the founder of Bringing Down The Band music blog, Founder/Director/A&amp;R at No Cosign Records, a member of Indiana-based Cut Camp crew, an Ableton instructor at Deckademics in Indianapolis, and a founding member of the Section Leaders. More detail: lonegevity.com Social media: @lonegevity