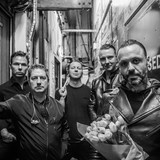 "Our forthcoming new 2020 album is going to catch some people off-guard,” says bassist Matt Novesky of unstoppable alt rock band BLUE OCTOBER about their new album THIS IS WHAT I LIVE FOR (rUp/Down-Brando Records). “We get into some corners of life that we haven’t explored before.” Catching listeners off guard is typical of BLUE OCTOBER who has made a career out of defying odds. From their mercurial ascent as a local band from Houston, TX to platinum-selling headliners, to the dramatic alcohol/drug-fueled spiral of lead singer Justin Furstenfeld and eventual resurfacing, to the band's triumphant return to the charts with hit albums and singles, Blue October has made a career out of being the unpredictable underdog. As a testament to this unpredictability, Blue October today surprises fans with the release of the new single Oh My My today, taken from their upcoming new album 'This Is What I Live For.' An anthem about the animal attraction from opposite sides of the tracks, Oh My My captures that magnetism and lets it loose inside a bottled-up and uncontrollable primal love song (“Girl, you get me high / Yeah, you’re my type / You’re danger danger.”).

“These songs on this album should make you want to fall in love with somebody, or miss somebody, or want to do something outrageous with your life,” says Justin. In support of the album, the band will also be embarking on an extensive nationwide tour that