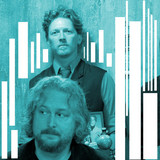 The Kingfisher is a small bird with a cleft beak and brilliant plumage. It feeds on fish, which it captures by diving. Halcyon is a poetic name for a Kingfisher. It is said that the floating nest of the Halcyon brings calm to the cruel sea. The Halcyon Brothers decorate the weight of the world in a charming and medicated disguise. The sound embraces with a clinched smile, and then stumbles and occasionally falls only to somehow prop itself back up for another round. The naked and soaked emotions reveal a need for rather than a dispersion of serenity. Centered around founding members Bjor6n Oranj and Bosky Rumbluffer,

The Halcyon Brothers have released