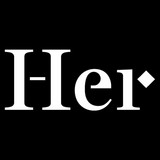 Catching one’s attention solely with its name, this male duet of the French Scene embodies a powerful concept. Not only did they choose this name for the universal themes by which they are inspired, such as love and erotism, but for with the emanating sensuality and strength therein. Such qualities are present in both the band’s musical compositions and live performances. Conducted by two singers whose duality is strengthened by their own differences, live performances are inherent to the band’s artistic proposal.   HER represents all the women who inspired them, but also the incarnation of a duality. One being born in Germany spent his childhood in Kraftwerk and Can, the other spent his high school years in exile in the United States from where he imprinted the roots of Black Music. These various influences shape their songs, which are best described as Frank Ocean meets Shuggie Otis, Child of Lov meets Aaron Neville. Nevertheless, HER’s lyrics also emanate from a generation immersed into the tormented world current affairs in which they find their sources.   Grammy awarded producers such as Joe Chicarelli, Jacquire King, Michael Brauer or David Kahne with whom they have been invited to collaborate, would probably have liked their originality. Strong of these experiences, their titles are however produced by their long time partner-in-crime Michael Declerck. Don’t look further, HER is the next music project to follow.