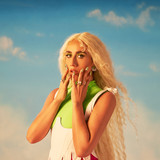 With an emphasis on narrative songwriting and genre-bending musical style, JUNO award nominated artist RALPH has created a special role for herself within the contemporary music scene; a sound that is catchy but cool, sexy but smart, edgy but evocative. She’s developed a soundscape that is uniquely her own, but what truly makes RALPH's songs special is that they are ferociously honest and relatable. This finesse sent her hit track “Gravity” up the radio charts into the Top 20, followed by a JUNO award nomination for Dance Recording of the Year. Starting with little more than talent and a vision, over the past three years RALPH has built an incredible following in the USA, Canada and Europe. She’s joined the likes of Ria Mae, Carly Rae Jepsen, and Scott Helman on three cross-Canada tours, and has drawn crowds south of the border for a North American tour with joan. Earning over 45 millions streams across platforms and seeing her music featured across television networks such as E!, HBO, Freeform and VICE, she has earned praised from a wealth of tastemaker press such as The FADER, Billboard, Paper, Paste, NYLON, V Magazine, Mother Jones, Interview Magazine, Teen Vogue, and MTV News.