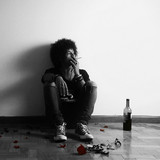 Jardim America is a Brazilian duo of alternative rock formed by Lucas Glicério (Grill) and Lucas Torres (TORRS). The project’s sound is a mix from many different rock and Brazilian genres, such as: grunge, alternative, indie, pop, bossa nova, MPB and samba. Their sound is complemented by melancholic lyrics exploring themes of love, sex, drugs, anxiety and the complex interpersonal relationships of the modern world we live in. In 2016 they released their first studio work, “Rosa”, an EP of four songs that sets up what would follow up on subsequent records. Later, in 2018, they did a version of “Decks Dark” for the compilation “RAINDOWN”, which saw many different artists from the Brazilian music scene record covers from the British band Radiohead. In 2020, the duo prepares to release their first LP titled “Meia Noite”.