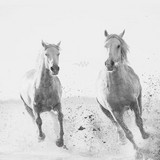 The Haunted Echoes is an alternative rock band with an eclectic international background. The project was founded in 2018 by musician and songwriter Oliver Amberg, known for his work with “Kissing Lucifer” as well. He was ultimately joined by Rachel Gavaletz (Dirty Heretics) from Brooklyn NY and Max Saidi, a London-based drummer who has worked with international artists like “Gianna Nannini.” This lively international trio are all about creating sultry and gritty rock songs, inspired by post-grunge, garage and blues. From the cavernous, fuzz-driven melodies of Queens Of The Stone Age, to the sleazy hellhound blues of Black Rebel Motorcycle Club and The Dead Weather, anything is possible. 2019 vocalist Katie Burkie from Nashville became the new voice of "The Haunted Echoes". If

Janis Joplin had a baby with Robert Plant, it would sound like Katie. On the 23rd of October The Haunted Echoes will release their first album "Songs Like Horses". Nine tracks from Classic Rock to Fuzz'n'Roll. Also available on vinyl.