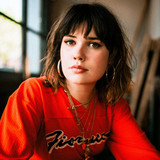 Despite only just turning 21, Lily has already been making giant steps as an artist. She made her TV debut featuring on the New years editions of BBC Top of the Pops. She’s been selected by MTV Push as one of their 2020 One to Watch, as well as hotly tipped by The Observer, Hunger, NME ,TMRW mag and more. She’s also got fans at BBC Radio 1 (including Scott Mills and Clara Amfo) who continue to support her. 2019 saw her playing with the likes of George Ezra, Freya Ridings and Tom Walker, as well as doing her own UK headline tour in the Autumn and performing at BBC Introducing Live. Following her critically acclaimed I Will Never Be EP, Lily’s first full-length release is the stunning More Moore mixtape, a dazzling document of the past few years of her life, packed full of break-ups, make-ups and ruined breakfasts. “It’s about growing up and working things out,” she says of the rite of passage record, which has its roots in Lily’s soul music icons, from Etta James and Amy Winehouse to Lauryn Hill, but adds a healthy dose of her own quirky personality and super confessional lyrics. 2020 is gearing to be an exciting year marked already with the release of a new track ‘Now I Know’. This is one of the first tracks that Lily wrote when she was 16; a bitter-sweet tale on missed opportunities and lessons learned. Also, she embarks in May for a series of UK dates, ending with her biggest London show to date at Shoreditch’s Village Underground.