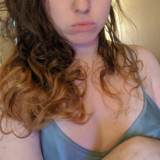 It is hard to imagine a more timely album than ‘mydata,’ the fourth solo release from the Melbourne-based pop artist Katie Dey. Her unique sound, which blends noisy synths with art-pop poetics, has felt ahead of the curve, but in this moment of quarantine-strained relationships and touch-starved isolation, ‘mydata’ feels even more prescient than ever. “It’s pretty explicitly about an internet relationship, which can be precisely as meaningful as a relationship that’s physical,” Dey says. “Because a long distance relationship is obviously physical too, in a sense. It’s physically felt in the body.” Dey’s signature sound, which has been grounded in the digital since her 2015 debut ‘asdfasdf,’ is perfect to capture this tension between absence and presence--or perhaps between different kinds of absences and presences. With ‘mydata’ though, Dey develops the sound that drew her acclaim in some new directions, contrasting her reverb- and glitch-filled synths with clearer, brighter sounds. Nowhere is this new focus on blending and contrasting sounds clearer than in her vocals, which break through the layers of sound in a way all together new for Dey.