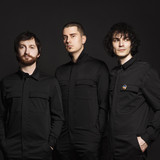 14.11.2020 - Cine Râde La Urmă 26.02.2021 - Sincrodestin 2021 -more releases to come! The Kryptonite Sparks are an iridescent power-trio that successfully combine indie, alternative, funk, punk and hard rock into their sound. Taking their first breath in 2010, they start recreating the British flavor of the 70's spicing it up with groovy sounds, with the modern feel of the indie subculture, with just a taste of avantgarde and seasoned with traces of pop. They managed to bring back to Romania from England and Italy all the best they could find from their studies, mixing it up with the diverse music background from their childhood and therefore have been called by the local media "The Best Romanian British Band". Their first album 'The Kryptonite Sparks” was released in 2013 and was a huge success. Following their great start, their success was justified with the Best Alternative Newcomer Award by Metalhead in 2014. The start of 2015 was marked by the participation in the competition Global Battle of The Bands Romania, which further improved their very good standing in the Romanian rock scene. 2016 marked the release of their second album, an EP called “Doi // A doua undă de bruiaj”, which consolidated their ever-growing influence especially with the single “Si golanii beau ceai”, well into 2017, the band managing to play in their lifetime for many festivals such as Electric Castle, Airfield Festival, Awake etc, as well as foreign shows in Greece, Bulgaria and Serbia.