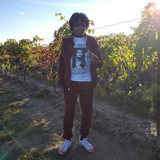 JRD876 is a Jamaican-born, Canadian recording artist & music producer. Given name Jonordo Roshane Dixon (his moniker combines his initials and Jamaica's area code). He started out in the entertainment industry as a promoter alongside Dj RumBlood. Starting from 2011 the two would travel across Jamaica endorsing various artists ranging from upcoming acts to major stars on the reggae & dancehall music scene. JRD876 worked fron 2014 to 2018

as a co-producer at Long Life Music alongside Dj RumBlood & Dizzy. After taking a break, for personal reasons, he returned in 2019 operating his own independent record label JRD876 Muzik & also began his career as an artiste. In 2015 the trio released their first compilation Eruption Riddim. Their first single was Mama Don't Cry by Shane O released in the summer of 2016. Briefly they managed Ele Trunk, the son of dancehall superstar Elephant Man, also released his first ever single One. JRD876 last venture with Long Life Music was with the release of the Smirnoff Riddim