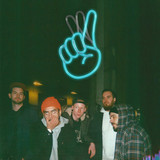 https://www.reachtheshore.com/ Reach The Shore was formed in 2012. Massive and melodic, their music is a cross between atmospheres, technical instrumental and breathtaking rhythms with catchy vocals and a powerful live show. An intense cocktail that will make you move. In 2014, their first album Faith & Confidence is unveiled. This first opus addresses topics such as the social problems of our world, human nature and their idols. The band wants their music to be accessible to all and decides to make their album available for free download. In November 2016, Reach The Shore releases a single called SAFE. At this point, the group feels the need to express themselves in relation to the tragic events that occurred the same year in Belgium and France. In 2017, Reach The Shore returns with their new conceptual album Hikaya. This album tells the story of Nilaya who with the help of Akhil, has to go through a process of purification before reaching a moral revolution. Each song on this album is followed by a music video that will take you on a journey through the captivating universe created by the band. 2018 marks a wave of change, Reach The Shore is back with new rock 'n roll hits and a new vibe that should appeal to a lot of people.