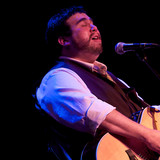 Steven Gellman is a quintessential folk singer-songwriter with "insightful original songs and homespun stories [that] provide a soul-warming folk rock respite in a busy, chilly world." (Donn B. Murphy, The National Theater) His songs tell stories of everyday life wrapped in notes that will have you humming along in a style that Billboard Magazine has described as "intensely sensitive and impressively intelligent at the same time.” Gellman has traveled near and far to perform at renowned acoustic music venues throughout the United States and Canada including the Birchmere in Alexandria, the Ark in Ann Arbor, the Blue Bird Café in Nashville, the Tin Angel in Philadelphia and Club Passim in Boston. In Washington, DC, he has performed at the venerated National Theater and the most sought after venue of all, The White House. Steven has had the honor to open shows for Dar Williams, Cheryl Wheeler, Richie Havens, Richard Shindell and Al Stewart among others.