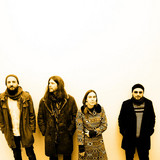 Based in Munich, the multidimensional Karl Hector & the Malcouns play a wildly hybridized meld of Krautrock, neo-psychedelia, jazz-funk, and Afro-beat. The brainchild of visionary guitarist, producer, and songwriter JJ Whitefield (Jan Weissenfeldt), keyboardist Thomas Myland, and drummer/multi-instrumentalist Zdenko Curulija, the band has functioned in lineups ranging from a quartet to a big band. Whitefield also founded Poets of Rhythm and the Whitefield Brothers -- two bands whose raw approach to analog recording and retro-funk revivalism opened the door for labels like Daptone and Truth & Soul. The Malcouns tour nearly constantly, but they record infrequently. For instance, after issuing their debut single, 2002's "Watou"/"Broken Ribs," it was six years and three more singles before they dropped Sahara Swing, their first long-player, on Eothen "Egon" Alapatt's Now-Again label in 2008. Since then, they've continued with the same m.o. Between albums -- which appear five to six years apart -- they supplement their catalog with limited-edition, hand-silkscreened EPs. These sought-after releases have insured that the "Cult of the Malcouns" has continued to grow and diversify; in fact, the release of 2019's Non Ex-Orbis was announced by media outlets from Japan to Austin, Texas. The band came together in late 2001 while Whitefield was on a break from Poets of Rhythm, who have existed since the early '90s and created bands such as Bus People Express, Dynamic Soundmakers, the Ghanaian-German collective Johnny!, Karl Hector & The Funk-Pilots, and more than half a dozen others for the sole purpose of releasing singles. The formation of Karl Hector & the Malcouns coincided with In the Raw, the recorded full-length debut of the Whitefield Brothers, a band led by brothers Weissenfeldt and Max. Though this ever-evolving combo has coexisted for the entire time as the Malcouns, their sounds couldn't be more different. Whereas the former's approach is driven by neo-psych and funk, the Malcouns have pursued an altogether more global aesthetic. After the initial single appeared on Soul Fire in 2002, they began touring Europe and issued four more singles, all on Now-Again. In 2008, Karl Hector & the Malcouns dropped Sahara Swing with a quintet that included Weissenfeldt on bass, guitars, keys, and metallophone; drummer/multi-instrumentalist Curulija and keyboardist Myland (both members of Poets of Rhythm); as well as the horn/vocal section of Ben Abarbanel-Wolff and Wolfgang Schlick. The program drew on underlying grooves that tied root influences from James Brown and Fela Kuti to the Ethio-jazz of Mulatu Astatke and the sonic-beat weirdness of Jean-Claude Vannier. Greeted by critical acclaim across the globe for their then-unique approach, they hit the festival circuit, playing alongside a variety of musicians -- from African legends like Ebo Taylor and stars of the Zambian "Zamrock" scene to England's Heliocentrics. Karl Hector & the Malcouns followed with the single "J.B. Rip" b/w "Popcorn with a Feeling" almost immediately. While Whitefield stayed busy in other bands, he was able to convince his bandmates to tour Germany and Europe, but it soon became an all-encompassing trek. Though Now-Again issued another handful of singles over the ensuing years, the Malcouns wouldn't release another album until 2014's Unstraight Ahead, which took the African pop sounds of Ghana and Ethiopia and married them to a funky prog rock that drew on influences such as Can, Agitation Free, Ibliss, and Tomorrow's Gift. Over the next few years, the band issued a handful of EPs for Now-Again including Tamanrasset, Ngugna Yeti Fofa, Coomassi, and Ka Rica Tar, which the Malcouns compiled in a four-LP box set entitled Can't Stand the Pressure. Whitefield kept forming and recording with more groups, with and without his bandmates, exploring as many styles on the musical spectrum as he could justifiably represent. In early 2019, Karl Hector & the Malcouns issued Non Ex-Orbis, an album that went deeper into the myth and legend of Krautrock history and built on the innovation of three of the most influential bands from the 1970s experimental German rock scene: Amon Düül, Popol Vuh, and Embryo. The set was previewed by the limited-edition single "Mother Seletta." ~ Thom Jurek