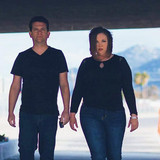 Keenwild, is a 2-piece band comprised of Jeney Kingsbury and Bill Gould. Growing up in small town Kansas, Jeney longed for city life and to be a professional singer. Performing in all of the singing events in her small town, she honed her vocal skills to perfection. As soon as she could get enough cash together, she packed her Chevy Beretta and headed west. Bill grew up in Southern California; music and entertainment were always a huge part of his life. He started hosting parties and making mixtapes for friends, while playing guitar and writing songs at home in his room. Bill met Jeney through a radio station website and with similar musical interests, the two quickly became friends. On September 18, the first single, Vicious, off a new full length album Make Me Feel was released. Make Me Feel, the second single was released October 1. The new album will come out in 2021 .