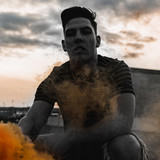 This not so black & white story began when M.I.M.E’s father passed away at the age of 7. He began writing raps to express his emotions and emulate his favourite artists.   His unique blend of Hiphop over EDM instrumentals has garnered him an enormous amount of attention since stepping into the scene in 2014. In 2018 M.I.M.E’s career skyrocketed when he amassed over 100 Million streams on his releases that year. Top songs include the unofficial trap anthem No Glory (feat. M.I.M.E & Drama B) (200 Million + streams ), “Enslaved” (30 Million + streams ) and “Living Hell” ( 25 Million + streams ).    He describes his sound as a combination of “Logic” & “Skrillex” although he doesn’t like to be put in a “Box” (No pun intended) when it comes to his style. He has dabbled in many different sub genres in the EDM scene but feels most at home over trap, future bass, or hip hop beats.   He is currently finishing his Debut solo album which has yet to be named. Singles begin releasing in September.   “There is no limit to how far we can take this, I’m in it for the long haul” Say’s M.I.M.E. He loves each and everyone of his fans, whom he has deemed the “Drama Squad”, and hopes to begin planning a tour as soon as the world returns to normal.