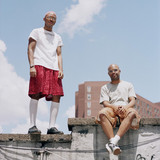 Native to New York, musclecars is a DJ / Producer duo consisting of Brandon Weems and Craig Handfield. As musicians, they equally share an admiration for the art form. Their desire to blend genres and express their appreciation for music is focused around their community- the end goal is to bring people together. Through a regular stream of high quality mixes, they have begun to turn heads in underground circles. musclecars has made a name for themselves in the past two years, headlining some of New York City’s most sought after nightclubs (such as Le Bain, Nowadays, and Public Records) and becoming one of New York’s most sought-after acts. They have also shared bills with legendary artists such as Tony Humphries, Nicky Siano, Robert Owens, and Roy Davis Jr., to name a few. With a deep respect and appreciation for the roots of dance music, musclecars has solidified their sound and mission in the scene. In 2018 they launched ‘Coloring Lessons’, a party that was aimed to add value to their city’s nightlife culture. While the party and sound are not genre specific, it is heavily focused around house, disco, jazz, and soul, embracing the musical elements of their black and brown ancestors. The monthly party's intention is to bring New York City's dance music scene back to what it was during the golden era of NY nightlife. They aim to spread the music that has been influential to them, and share it with a younger generation of their peers.