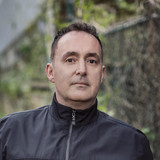 Steve Helstrip, aka The Thrillseekers, has been at the forefront of the global trance scene for some 15 years. From his first single 'Synaesthesia', through to countless club classics including 'The Last Time’, 'Affinity’, ‘Es Vedra (with Aly &amp; Fila)’ and more recently 'Just Because’ and ‘Amber’, Steve Helstrip has been behind some of the most emotive electronic music ever released. He's worked with pioneers like Trevor Horn, shared co-production credits with Chicane and Ferry Corsten, and remixed for artists including Tiesto and Armin van Buuren.