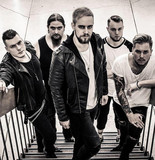 Mile: Working to keep the Swedish tradition in metal. The Swedish band Mile appeared on the scene recent with a modern sound mixing heavy metal and hard rock, combining heavy riffs and melodies. Created 2012 by former members of Cabinett - Marcus ”Masken” Karlsson (Vocals), Fredrik Palm (Guitar) and Marcus ”Folke” Bass - The line-up was completed by drummer Dennis Kjellgren and guitarist David ”Dave” Wallberg. The New Project was named Mile. ”I´ve been asked if the name had to do with the leader of Kreator but, although we like the sound of the German legend, it´s not about him. It´s an easy name to remember; we´re not added to a specific label of music and can represent the distance that music can take you, ”explains vocalist Masken. Before debuting on stage, the musicians remained rehearsing and composing their songs for a whole year. ”We were aware that with the immediacy of the times we live in and with the huge amount of metal bands that appear daily, the quality had to come first”. The band has played festivals where giants like Twisted Sister, Engel, Lillasyster, Mustasch, Corroded and Europe have been present and also been support for Implode, Ammotrack, Eyes Wide Open and Mean Streak. In 2015, Niklas ”Nike” Tidholm replaces one of the founders, bassist Marcus Folke. In the same year the debut album, "Lost" was released in December and heard have been streamed more than 2 million times. The second album "The World in Focus" was released in january 2018.