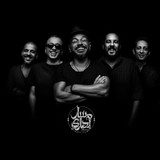 Since they got together in 2005, Massar Egbari has taken the Arabic music scene by Storm with their music and their disruptive lyrics gaining new audiences wherever they plug their instruments. Their edge is their progressive tunes combined with the universal complex topics they tackle. Their uniqueness lies in their intriguing and diverse music, characters and background. Over the pat 12 years, Massar Egbari left a deep footprint that contributed to shaping the independent music scene. Winners of many awards including the the Middle East Music Awards (MEMA) twice in 2013 and 2017. They were also bestowed the title of “Artists for Intercultural Dialogue” by UNESCO in 2010. Since 2006, Massar Egbari