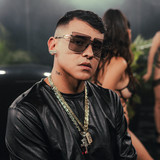 Kevin Roldan is a Colombian songwriter, singer, rapper, producer, and collaborator. He has been pursuing a professional music career since he was 13 years old, working in reggaeton and urban pop. Born in Cali, Roldan was initially obsessed with hip-hop and reggaeton and began singing at age nine. Four years later, he took the enterprising step -- with finances provided by his parents -- of entering a recording studio and cutting the single "Macatraca Contra la Pared," which was turned rather quickly into a video by the artist and a local filmmaker. It exploded regionally. To promote it, Roldan threw a dance bash at a large hall called Macatraca Party in Cali. Heavily promoted on social media, it sold three-thousand tickets and left another two-thousand people outdoors as word of the party spread. He took the money he earned and started his own label called Represent Colombia Music to promote his own music as well as that of other regional artists. Roldan began making videos and issuing digital singles relentlessly, ever expanding his media profile. They amassed millions of views on YouTube. He signed a distribution deal with Universal and in 2012 released five singles. He cut his self-titled debut full length in 2014. It entered Billboard's Next Big Sound chart at number two and netted a series of collaborative video singles through 2015 including "Salgamos" (feat. Maluma and Andy Rivera), "Una Noche Más" (feat. Nicky Jam), and "Quién Te Va a Amar Como Yo" (feat. Ronald aka "El Killa"). The following year he was a featured collaborator on singles by Bryant Myers, Alexis & Fido, Ozuna, and Duran de Coach, before issuing a pair of his own tracks in July ("Rich Kid") and August ("Ruleta Rusa"). ~ Thom Jurek, Rovi