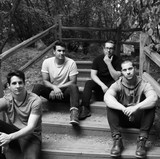 Summer Summer is a four piece based in Boise, Idaho. The band consists of vocalist Michael Pease, guitarist Matt Bourdon, bassist Tyson Boorman, and drummer Mark Abernathy. Starting in early 2019, the band was formed after the members worked on previous projects together.   They released their self-titled EP in August of 2019, followed by singles “Haunting” and “Mountain/Valley” in 2020. The latter of the two was added to their debut full length “The Things That Haunt Me” released in February of 2021.