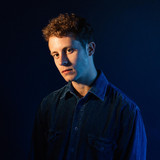 Joe G is a solo rock artist - singer, songwriter, guitarist and drummer – from Suffolk, UK whose songs are inspired by themes of friendship, love and politics. Being part of Aldeburgh Young Musicians as a teenager offered great exposure to a broad range of musical influences. He studied Artist Development in London and following the completion of his history degree at Goldsmiths he began recording and releasing songs he wrote during his time in London. Many of Joe's songs have been aired on BBC Introducing in Suffolk and in 2019 Joe played 113 gigs solo as well as with a full band including at festivals such as FolkEast and Ipswich Music Day as well in the Hoax/Ed Sheeran pop-up shop in Ipswich in August 2019. So far in 2020 Joe has released the bold new single and video ‘Binge Mountain’, taken from his upcoming second album. During the covid-19 ‘lockdown’ months Joe performed via live stream on his social media pages and helped raise money for charities such as Autism & ADHD by performing as part of their online music festival.