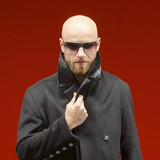 The Danish king of the remix, Funkstar de Luxe, is best known for his million-selling reworking of Bob Marley's "Sun Is Shining." Funkstar was first exposed to Marley's music as a teenage keyboardist in an amateur reggae band. His formal education was as a technician, but a dream of owning his own studio and producing his own tunes kept him working on his music. Taking a public domain Marley track and adding a thumping house beat, the Bob Marley vs. Funkstar de Luxe "Sun is Shining" was a huge hit and won best-selling international reggae single of the year at the World Music Awards. Longtime Marley manager Chris Blackwell was miffed and hurried to release his own remixes, but Funkstar had already moved on and had another hit with a remix of Marley's "Rainbow Country." Plenty of other remixes for other artists followed (Tom Jones, Grace Jones, Mary J. Blige, Barry White), and the best were collected on Keep on Movin: It's Too Funky in Here. An album that collected remixes of the remixes, Keep on Moving: De Luxe Remix, followed. In 2003, Funkstar released an album of his own material, Funkturistic. ~ David Jeffries, Rovi