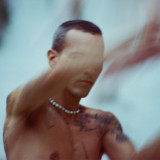 For those who’ve followed Gabriel Garzón-Montano since his 2014 debut Bishouné: Alma Del Huila, the critically-lauded, self-produced EP that put him on the map, and served as sample fodder for a handful of popular music’s most iconic artists, it is known he is poised for greatness. His follow-up LP, 2017’s Jardin, melded classical and folkloric instruments with rnb, hip-hop, and cumbia, proving once again that Gabriel is comfortable making transformative, funky, cathartic records all by himself. Now, the artist is present, and he is in final form. Garzón-Montano’s ability to execute a wide range of musical styles is his secret weapon – and so it is no wonder he bristles at the prospect of settling into any one genre. “Genre has never been a consideration,” he says. “The

idea of genre uses fear of failure as a baseline. Genre puts the music in a box.” After debuting three new tracks with an iconic COLORS performance, we see this more than ever- Whether it's being the debonair leading man, the wistful impressionist, and the Latino Urbano hitmaker. In this life, a first-generation American, born in Brooklyn to French and Colombian parents, can weave tapestries of sound that defies genre. Where big brujo energy means blunts and 3 inch heels; it means Appolonia’s hands around you from the back of that motorcycle; it means nueva cancion, and reggaeton; it means the rabid, joyful individualism of funk – of oneness – of the one. (Yeah, in this life - you’re on your own.)