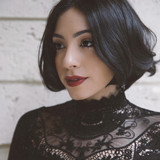 Stephanie Carcache was born and raised in Miami, FL to Cuban origin parents. With a Hispanic background growing up in the United States, Stephanie found a form of expression through her voice. After competing in the televised series “America’s Most Talented Kids” at the age of 13, Stephanie began an early career in the music industry. Over the years she has furthered her musical studies together with Berklee College of Music Online as well as graced stages around the world with performances alongside Grammy Award Winner Stephan Moccio and the LGT Youth Orchestra for a sold-out concert series in Abu Dhabi, Unite Arab Emirates bringing the sounds of a full orchestra, pianist, and a pop crossover vocal together for a “Classic Meets Pop” sound. Stephanie’s passion for life and humanity translates through her music and the work being done through The Millennial Women Talk podcast. A podcast co-hosted by sisters, Melissa and Stephanie Carcache. Her hope is whether it be through the unity that music creates or engaging in open conversations, we can realize that fundamentally we are all so much more alike than we are different.