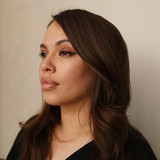 Currently based in Nashville but originally from Los Angeles, Savannah Lancaster is a singer-songwriter known for her scintillating vocals and resonant lyrics. With hints of jazz, Americana, and soul, her music has been characterized as bittersweet, soulful, and hypnotic. In 2018, Savannah self-released her debut solo album, entitled “Letters,” which has been compared to the early jazzy work of Norah Jones.    Savannah is also the vocalist behind the acid jazz + downtempo duo SUNDUR, whose debut album “Somewhere There’s Music” has garnered special attention from the likes of KCRW (NPR | Los Angeles), Bandcamp Weekly, and numerous blogs + publications as “an excellent release that stands up admirably alongside trip-hop’s mainstays.” (SF Chronicle)   https://linktr.ee/savlanc