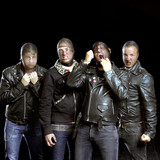 The hardcore/punk-pop quartet Randy originally formed in the early '90s in the bandmembers' native homeland of Sweden. By mixing politically conscious lyrics with instantly memorable and melodic tunes, Randy had no problem building an audience, and began issuing albums on a regular basis beginning in the mid-'90s. The list of albums includes 1995's There's No Way We're Gonna Fit In, 1996's The Rest Is Silence, and two years later, their first U.S./Canadian release, You Can't Keep a Good Band Down, which earned praise from Maximum RockNRoll, which called it "the best melodic punk CD since Bad Religion's No Control." By the dawn of the 21st century, Randy were signed by the well-respected punk label Epitaph/Burning Heart, issuing their fourth full-length overall, The Human Atom Bombs, in August of 2001. They followed up two years later with Welfare Problems. Their soaring popularity back home was evident in a repeated slot playing at Sweden's important Hultsfred Festival, a 2004 nomination by Swedish national radio for the Golden Microphone Award (best live act), and a radio hit with their song "X-Ray Eyes." Randy were also nominated in the Best Rock category at the Swedish Grammys and as Best Live Act at the independent Manifest Awards. Randy the Band was released in North America in January 2006 on Fat Wreck. ~ Greg Prato, Rovi