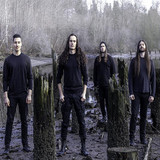 Atavistia is an epic metal band from Vancouver, Canada. They explore various forms of metal within their music resulting in a symphonic mix of nature, atmosphere, and technically precise musicianship. The diversity of Atavistia, much like a forest in the full bloom of spring is something to behold.   Influenced by the epic landscapes and nature of British Columbia, the coldness of winter and the flourishing of summer can be felt in each song. Visions of lands long forgotten in time are key elements behind the music of Atavistia.   Their debut, “One Within The Sun” released in September 2017 was initially created as a one man project from the founder, Mattias Sippola. Now having a full live lineup, the live shows have begun. They are currently putting the finishing touches on their second full length album.