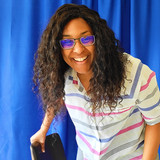 Shayla McDaniel is a singer-songwriter/multi-instrumentalist crafting guitar-driven alt pop in Knoxville, Tennessee. Driven, productive, and prodigiously talented, McDaniel is now poised to emerge a world-class artist with a uniquely emotive indie-rock aesthetic. Up next, she will be playing local and regional shows with her band, as well as intimate solo performances for her ever-growing audience. “I feel like I am really finding myself as an artist these days. It’s been such an uplifting journey,” Shayla says. In a short period of time, the young artist has garnered prime accolades. She performed at Rhythm N’ Blooms Music Festival; the Waynestock Festival; Sunset on Central; Women in Jazz Jam Festival; and live on-air at WUTK 90.3 FM, WDVX 89.9 FM, and WOZO 103.9 FM, among other stations. Shayla has been in Knoxville Music Warehouse’s Top 16 song charts; been voted by fans as Knoxville’s Favorite Band; won numerous Knoxville Music Awards; and earned prestigious awards nominations from CityView Magazine and Knoxnews.