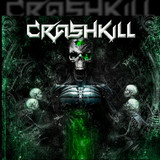 Brazilian band Crashkill was formed in 2016 by drummer Mailson Buson, with influences of bands with tradition in the Brazilian metal like: The Mist, Chakal, Overdose, Mutilator and even old and old Sepultura the band performs a ThrashDeath that portrays all the human social pathology and its dogmas. In July 2017, the band released their first CD entitled "HATE ZONE" released independently and having a good repercussion abroad being performed on radio stations in countries such as the Kebek Metallik Program in Canada. Currently the band is in a new formation with the entrance of the new singer Renato Ferreira and Bass: Fernando Gonçalves