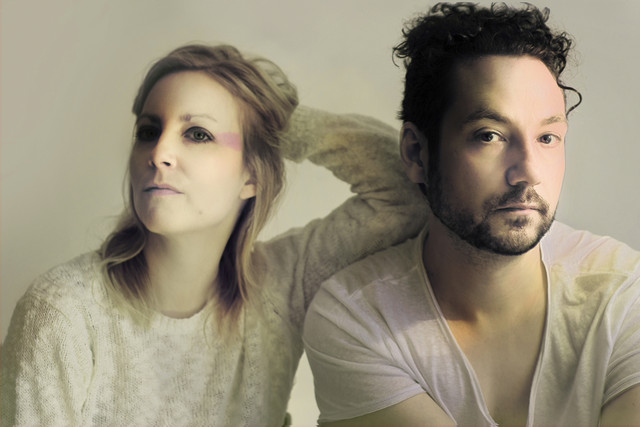 Taking cues from My Bloody Valentine and Miranda Sex Garden, Sweden's Moonbabies have gained wide acclaim at home and abroad for their sophisticated hypnotic pop. Comprised of multi-instrumentalists Ola Frick and Carina Johansson, Moonbabies maneuver through new territory in the pop landscape, beautifully mixing psychedelic textures, moody electronics, and expansive instrumentals. Honing their harmonies while busking on the streets of Copenhagen in 1996, the duo would soon begin writing songs and covering their favorite Pixies, Beatles, and Simon & Garfunkel songs before enthusiastic crowds. Soon their debut demo recordings would cause a sensation on Swedish National Radio, resulting in their becoming a sought-after touring act. After signing to Duckweed Records, their 2000 debut, June and Novas, was released to glowing reviews. The duo prepared for their first U.S. tour in the spring of 2001, promoting it with the We're Layabouts EP. As they prepared their next album, A Bouncing Space Records released the "Standing on the Roof/Filtering the Daylight" single in the summer of 2002. That next record, Orange Billboard, eventually appeared in early 2004 and was followed by a tour in Germany, Austria, Denmark, and Sweden. A mini-album, War on Sound, was released in mid-2005 as a teaser for the group's third full-length, Moonbabies at the Ballroom, which appeared in spring 2007. Over the next seven years, Frick and Johansson put Moonbabies on hiatus during which time they relocated to Berlin and gave birth to their son. Inspired by Berlin's thriving dance and house music scene, Moonbabies returned in 2015 with the experimental Wizards on the Beach. ~ Matt Fink, Rovi