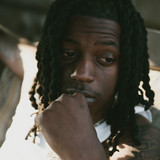 Rapper OMB Peezy was born in Mobile, Alabama in 1997. Part of a musical family, Peezy started rapping at age 12, soaking up Southern rap influences like Kevin Gates, Soulja Slim, and Masta P while developing his own style. Peezy was still in his teens when he started to make serious waves with his music, dropping the blistering single "Lay Down" in 2016. The track caught the attention of many, including rapper Nef the Pharaoh, who played the track for Bay Area legend E-40. E-40 signed Peezy to his 300 Entertainment/Sick Wid It label. Relocating to Sacramento, Peezy released the singles "When I Was Down" and "Porch" in 2017 before releasing his debut EP, Humble Beginnings, later that year. 2018 brought a bevy of singles as well as the mixtape Young & Reckless, a collaboration with Sherwood Marty, and Peezy's own mixtape, Loyalty Over Love. Finally, in April 2019, he made his full-length debut with the album Preacher to the Streets. ~ Fred Thomas, Rovi