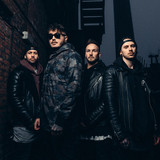 Metalcore newcomers InVisions spawned into being in 2016 from the ashes of former local bands in their hometown of York, England. Adrenaline-fuelled and so-called “cataclysmically heavy”, InVisions are driven by a collective ambition to create their own heavy-hitting yet anthemic sound that nods to old school thrash whilst retaining a fresh and modern perspective. Within a matter of days, the band had entered the studio to record their debut single ‘Unbreakable’ with founding members Ben Ville, Lucas Gabb and Alex Scott. A short while later they recruited drummer Josh Hardy to complete the line-up and dive headfirst into their debut self-released album ‘Never Nothing’, released August 2017. Since the release of Never Nothing, InVisions have since returned to work with producers Sam & Joe Graves at Innersound Audio (Asking Alexandria, Eyes Set To Kill, Glamour Of The Kill) on their standalone single ‘Parasite’. InVisions show no sign of slowing down and in 2018 signed to Stay Sick Recordings (Fronz - Attila) and released their sophomore album 'Between You & Me' in February 2019. CDs & Merch: InVisionsOfficial.com FB: InVisionsOfficial IG: InVisions_Official Twitter: InVisionstweets YouTube: InVisionsOfficialUK