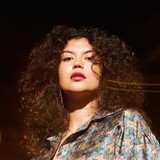 Karen Harding, a singer and songwriter from Newcastle inspired by Whitney Houston, Craig David, many others and classic dance music. Her first single “Say Something” co written and produced by MNEK was signed to Capitol Records / Method label, home to Sam Smith. The track was released in November 2014 and has since hit over 1 Million Sales in the UK, with combined Streams of more than 100 MILLION!!!   Signing a new record deal at the beginning of 2019 with Ultra Music she's featured on records with Wilkinson, Paul Woolford , Purple Disco Machine and many more. Her release “Undo My Heart” with Digital Farm Animals received a great reception and was playlisted on BBC Radio 1, KISS, KISS Dance and Capital Dance as well as many others. Her single 'Morning' with Shift K3Y brought a new energy like no other, adding those garage and trance vibes that inspire Karen's music so much. With a string of collaborations and features set to come early 2021, stayed tuned to hear Karen's new EP to come later in the year.