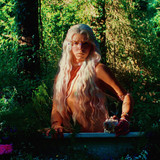 Parisian based singer, songwriter and actor Jaydena Athena De Martel, makes alternative-dance-pop music. Born in Guadalajara, Jalisco, Mexico, and raised under the Californian sun, JAYDENA spent her formative years absorbing the pop culture from the west coast. JAYDENA started playing at small venues through 2014 and early 2016. In the same time period she dropped two official singles, “Speculations” and “Rule The World” which are the representation of her versatility within the pop genre.   On August 25, 2017 she released her very first official extended play record "Reckless Childish Young Adult" an album inspired by

the 80's electro-dance-pop and folk music, with songs like "boysforBOYS", "Reckless Childish Young Adult" a self anthem of love and loss. on 2021 she released “OXYGEN” her first promotional single taken from her very first studio debut album “Beautiful Creatures Of The Night” (2021), where she explores deep down her very first 25 years of living in this world as a human, as part of something bigger than herself, as a piece of art, and as nothing at all. With her music JAYDENA proves that she is not just a new face to the pop industry, but a promising outspoken individual. With the help of beautifully-catchy tunes, uptempo beats, shimmering keys and self-constructed samples, JAYDENA tells an honest story: HERS.