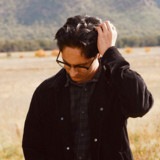 Sid Acharya is an Australian composer who is known for his internationally acclaimed studio albums and music for film. His style is most recognizable by use of electronic moving elements with deep and melancholic orchestral textures, mostly within the genre of contemporary classical music. Sid was raised in England for some time, and mainly in Aberdeen, Scotland for the first 10 years of his life, until moving to Newcastle, Australia in 2009. His exposure to a variety of cultures and locations around the world, particularly his youth in the shire of the Scottish Highlands was a key force in shaping his musical style in addition to his Indian ethnicity. Although Sid attempted formal piano lessons for some time, he had no interest in playing pieces written by other composers and wished to write his own music. Contributing to this, Sid struggled to play by traditional method of sight reading as he cannot read sheet music and would play by ear instead. Without formal musical training, Sid began experimenting with musical software and looping programs in his teenage years, which formed the basis of his knowledge for his introduction to orchestral music in 2017. His music has been used for a variety of purposes with NASA, ABC, and trailer label Methodic Music, in addition to placements in film and documentaries. Sid also continues to release his internationally acclaimed studio albums such as his 2020 release Stories from the Sky, and composes music for award-winning films.