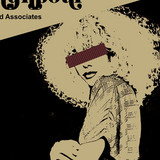 Best described as 'neo soul’ Australian band KINGS & ASSOCIATES live show is both powerful and poignant. 3 X 2018 Australian BMA's on the back of their 2nd album TALES OF A RICH GIRL which was tracked in LA by 7 x Grammy winner Jim Scott and mixed in Nashville by 6 X Grammy winner Vance Powell. The band features the dual vocals of principal song writer Angie singing her 'life stories' with honesty and vulnerability, and Benjamin Cunningham who's soulful voice has been compared to the great cross over artist Johnny Guitar Watson. "...Produced by Seven-Time Grammy-winner Jim Scott the album promises to be a humdinger." Randy Radic HuffPost. "You are left emotionally drained after this soulful experience has concluded. There is such a seamless craftsmanship at work here that is cunning in its' deceivingly simple approach. The magical voices of Angela and Benjamin set against expert musicianship and top notch production propel this effort into greatness. Hearing is believing!" Peter Szalony, Blues Blast Magazine "Wow l think l have just been to heaven and delivered back a new man..." Peter Merrett, PBS106.7, Melbourne, Australia March 2020 sees the Kings’ launching their new album ‘NEIGHBOUR’. The album was once again tracked in LA with Jim Scott in July 2019 and this time mixed by Chicago based Jim Tullio. On the live front and following on from their debut 2019 Nth American tour the band will be heading back to the US for a 2020 summer run of shows in support of the new album.