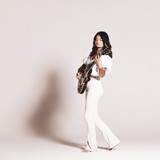 Naomi Snell, a warm, jazzy soulful singer-songwriter from the Netherlands. She grew up in the world of classical music and started taking violin and piano lessons at a young age. In 2016 she was one of the eleven finalists of Giels Talentenjacht (GTJ). She performed at several festivals (including Noorderslag, Mundial festival, Festival de Beschaving, etc.) and several times at radio 3FM. On November 15, she performed in Paradiso with the other ten finalists and sang a duet with Dutch singer Boris (aka Bo Saris).   In November 2016, she was commissioned to sing the song for the Bijenkorf's Christmas commercial. Next year her Debut jazzy/soul EP will be released which exists 6 songs about love, life and grow.