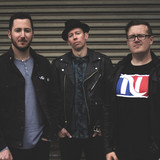 Like many passionate songsters before him, Jerod McBrayer listened to Jimmy Eat World’s Bleed American and it changed his life. In 2011, Jerod recorded Worth Taking’s first EP, singing all vocals and playing each instrument. The Anxious EP turned out to be a well-rounded five-song power pop-punk record that showcased Jerod’s command of simple, irresistible melodies, while preserving the electrifying energy of punk music. His lyrics related effortlessly to the challenges of post adolescent life, without the whiny, post-breakup discourse so prevalent in many pop- punk songs. After performing at the Cornerstone Festival, he decided that if he was ever going to find quality band members, he needed to head west. Drawn to the Bay Area for its reputation of spawning countless great bands, Jerod settled on San Francisco. Here he was introduced Chris Self, who played in the Adeline Records band, Fetish. The group quickly meshed and spent 2012 touring, writing and recording. The next two years proved to be promising as well. Touring Japan, they offered Oddly Pacific to a crowd left elated and ready for more. Soon enough they returned to the states only to continue working on the first full-length album, “Art Imitates Art,” released in 2014. After relentless hours of writing and recording, 2016 was the year of "Hangman" the band’s second full-length album. Jerod and Chris, now joined by Chase Kossack on drums, toured the U.S. and Japan to give fans a taste of an all new Worth Taking.