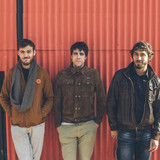 The idea of Speaker Cabinets was born in 2006, during a somewhat psychedelic trip in the Island of Formentera, when Nacho and Guillem decided to leave behind their facets of pure instrumentalists and try to enter the world of the composition. One year later, after several frustrated trials, they end up creating Speaker Cabinets together with Adrià Muixí that complete the trio. Beyond a strong vocation for an unbridled music to make people dance, the group hide a suggestive amalgam of influences that takes them away from the stereotypes. Their music moves between alternative rock and indie rock, with a touch of electronic music and some passages of psychedelic rock from the 60s. After a very small period of creation, they came out with REQUIEM FOR ATLAS CITY, the first LP of Speaker Cabinet. Recorded in the Pinkerland studio by Stefano Macarrone (Mendetz), produced by Christian Rey (The Pinker Tones) and mixed by Santos Berrocal in Blind Records (Santos&Fluren), the album is about the story of Atlas City, a fictive city where the whole plot of the disc takes place. In live, the band has a powerful staging with a great deal of energy and decibels. Its good combination of live music with sequenced audio ensures the improvement of its work in studio. At the end of the day, Speaker Cabinets is a safe bet that always succeed in surprising the public with its original proposal that make everyone dance.