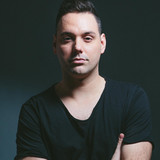 Manmachine, the psychedelic trance alter ego of Miroslav Bako also known as Massiva and Excizen, music producer, award-winning composer of orchestral music for Theater, Ballet and Film with university degree in music production. After many years of DJ-ing, he turns to production and immediately achieves success with the debut of his live project in UK's popular Higherground Show in 2003. In 2008 he signed first tracks as Manmachine, followed by album “Reintegrate” released in 2010 for Ovnimoon Records and 2nd album “The Second Warp” in 2012 for Yellow Sunshine Explosion and