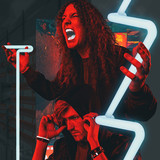 Andrew Evans – Vocals/Guitar Tanner Hendon – Bass/Drums   The renegades push any movement forward. Like Machines break rock down to its purest elements only to recombine and re-forge those elements over a future- facing flame. The riffs rage, the beats punch, and the choruses stick, while the keyboards and synths cast a cinematic shadow over this combustible core. After racking up millions of streams and views and receiving acclaim from RIFF and Alternative Press who touted them among, “10 Modern Rock Bands That Prove The Genre Is Far From Dead”.   The pair of lifelong friends first met in their hometown of Atlanta, GA during elementary school, simultaneously developing a passion for hard rock, jamming together, and launching Like Machines in 2019. They shared stages with everyone from Clutch, Avatar, Pop Evil, Crobot, ’68, Hero The Band, and Fozzy. Alternative Press raved, “If you think rock music is dead, listen to their 2020 EP, Hear Freedom Ring, and come back to us.” Throughout 2020, they recorded remotely with legendary producer Bob Marlette [Shinedown, Black Sabbath, Rob Zombie, Seether]. On there upcoming release, they prominently infused electronic drums, keyboards, and synths, falling under the unexpected inspiration of Dua Lipa and Post Malone.