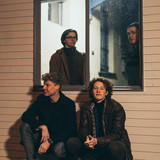 A Story For Reflection

„A Story For Reflection“ is an Indie-Rock-Pop bandproject formed by musician and songwriter Maxi Aldinger and singer/songwriter Jakob Muehleisen in 2015.   After the release of their debut single Darkness in 2015 as „J.A.X“ they decided to go on under the name „A Story for Reflection“.   In 2017 they released their second single Higher at their own Label „Upon the Waves“ which was a big local success.   After the release of the third single " Bear & Hunter " in December 2018 Aldinger and Muehleisen were joined by Drummer Anton Engelmann and Bassist Veit Kobler.   In January 2020 the band released the first single "MR. FANTASY" from their debut EP "CAPRINO", which was released in February 2020. The EP went to number #9 on the iTunes Alternative Album Charts.