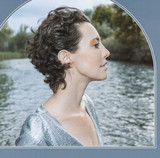 Ray Bradbury’s 1950 sci-fi short story collection The Martian Chronicles takes place between 1999 and 2057. Life on earth is crumbling post-nuclear war. The robots are thriving, carrying out the duties set before them, while the humans are forced to flee to Mars. Esme Patterson’s fourth studio album, There Will Come Soft Rains, is named after the collection’s penultimate tale.   There Will Come Soft Rains revolves around the constant cycle of creation and destruction. A process that Patterson felt reflected the sonic direction she started moving in on 2016’s We Were Wild, and which she delves deeper into on her newest effort, and first for BMG. “It’s about how life continues on this planet after humans inevitably wipe ourselves out,” the Denver-based artist says. “The songs echo the surrender of starting over and failing and starting over again many times. I was hoping to convey the bittersweet peace of letting go alongside the courage to start again, being swallowed by fear and pain and coming out the other side stronger.”