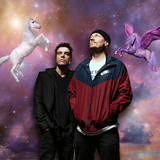 In 2000 Grand Theft Audio released their debut album ‘Blame Everyone’. Their riveting sound has been compared to The Sex Pistols, AC/DC, and Prodigy, twisting alternative rock into a punk metal electro hip-hop mash-up. Their story could have been written for the turn of the 21st Century. Band gets major record deal and find themselves living the dream. Hollywood movies (Dude Where’s My Car? American Pie 2), video game synchs (Gran Turismo 3 and FIFA 2001) and tours with legends in the USA and Europe. They are propelled by explosive momentum and endless possibility until… their record label is dissolved.

The band are left with no team, no deal and no safety net leaving all bewildered, bitter and bruised by the whole experience. In the aftermath, Ritch Battersby returned to his place on the drum stool for UK rock pioneers The Wildhearts.